skip to main | skip to sidebar

The Return of the "Who Knew?" Administration!

From the same people who brought you "no one could have imagined" hijackers using commercial aircraft as weapons (except that FBI agent in Phoenix, the folks who prepared the August 6, 2001 President's Daily Brief and perhaps the Wachowski brothers) and "I don't think anybody anticipated the breach of the levees" (except the Homeland Security officials who alerted both the White House and FEMA of their prediction of massive levee failure before Katrina made landfall), we bring you:

Condi Rice on January 29, after Hamas won a majority of seats in the Palestinain Authority's parliament:

"[N]obody saw it coming .... I don't know anyone who wasn't caught off guard by Hamas's strong showing." 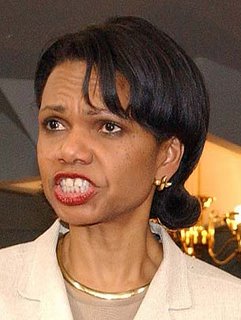 Nobody other than, say, Middle East expert Shibley Telhami, who announced on NPR's January 25 Morning Edition that the bottom line is, "Hamas wins." Or, if that doesn't sufice, how about the editors of The Economist, who wrote in their leader for the January 28 print edition (clearly written before the announcement of even the preliminary results of the election): "Following this week's election, Hamas will for the first time have members in the Palestinian parliament, and perhaps even control it." Indeed, so confident were the editors of The Economist that they put this leader into print, knowing it would come out after the election results came out, and slapped spooky images of be-masked militants on the cover along with the bold legend, "Enter Hamas". (The preliminary results first appeared in the evening of January 26, GMT, and hit the late edition of East-Coast papers here in the States.) And apparently, Rice was not talking to the Israelis who, according to a January 23 piece in Haaretz, were "preparing for the possibility that Hamas will participate in a Fatah-led government or even win the elections itself." (The Israelis, by the way, met with "American envoys," presumably from Rice's State Department, around January 13. The "American envoys" were sufficiently concerned about a strong Hamas showing that they promised that the U.S. would not recognize any Palestinian government in which Hamas participates. Perhaps Condi does not "know" the diplomats that State dispatched to Israel in the run-up to the election.) Surely, it was enough of a possibility that the State Department would have been actively mooting the scenario in order to determine what the best course of action would be in that event. Right? Please tell me they at least thought about it while in the shower! It wasn't too strenuous an exercise for the editors of The Economist, who laid out a very sensible plan, one that actually involves "a destination" -- and not just a fatuous, contentless "road map." And it need not tax the brains of the current administration to come up with one, as the Clinton administration already did the work: "a Palestinian state in Gaza plus 95% or so of the West Bank; a shared capital in Jerusalem; Palestinian sovereignty over the Temple Mount; Israeli sovereignty over the western wall; and a right for Palestinian refugees to return to the West Bank and Gaza but not to pre-1967 Israel." As The Economist observes, all Bush need do is call it his own plan and get "the quartet" to throw all its weight behind it.
Posted by Ginger Man at 12:16 PM No comments: 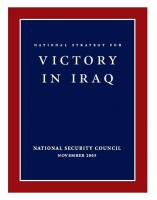 Posted by Ginger Man at 3:43 PM No comments:

Now this is just sick

Chalabi to visit wounded US troops at Walter Reed.

Sick and depraved.
Posted by Ginger Man at 6:04 PM 1 comment:

You, and your reporting, will be missed. 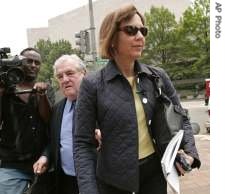 Don't let the door hit your ass too hard on the way out.
Posted by Ginger Man at 4:58 PM No comments:

Lott said that much of the information contained in the Post report -- which stated that the U.S. was holding terrorist suspects in secret CIA jails overseas -- was discussed at a meeting of Republican senators last Tuesday.

The revelation appears to torpedo the political gambit of Senate Majority Leader Bill Frist (R-TN) and House Speaker J. Dennis Hastert (R-IL) who called on the Senate and House intelligence committees to investigate who leaked the information to the Post.

That's it, if this pans out, I'm going to dust off my copy of the Upanishads and convert to Hinduism.

UPDATE: CNN has confrimed this much. Trent Lott indeed told a roomful of reporters that he believes that a Republican Senator and/or staffer leaked the "black sites" story to the Post. According to CNN's Ed Henry, Lott "stunned reporters" by disclosing that the "black sites" were discussed at a republican-Senators-only luncheon with Dick Cheney the day before the Post article ran (once again, the image of a beer hall in Munich around 1923 leaps to mind, don't know why). Apparently Lott complained that "we can't keep our mouths shut" and that "every word that was said in there [i.e., inn the Minich-beer-hall luncheon] went right to the newspaper." Wolf Blitzer then dons his Captain Obvious suit and says, "this could really boomerang against the Republican leadership." ThinkProgress has the video.

There can be no doubt (to use the immoral words of the Big Dick himself) that this is an hilarious spectacle. And I do hope that Lott's instinct is correct and that at least one source for the Dana Priest article is a Republican Senator or Senate staffer. But I'm getting a distinctly fishy whiff from Lott's statements. First of all, taking Lott's statements at face value (perilous, I know), he is basing his belief in the GOP origin of the leak on the coincidence of the article coming out the day after the black sites were discussed at a GOP-Senator-and-Cheney luncheon putsch and the similarities between what was related in the meeting and what Dana Priest reported in the Post. That is, to be sure, a might big co-ink-ee-dink. But I have a number of problems with the Lott scenario all the same:

The Post article simply does not look like something that was dashed off in less than one day on the basis of a leak from a Senator or hill staffer. To the contrary, looking first just at the substance of the thing, it appears to be a throughly researched piece, with a great deal of background and context woven into it, not simply a wad of Capitol Hill dish. Moreover, even allowing for some of the, shall we say, vagaries of how reporters describe anonymous sources, the piece is sourced variously to: "U.S. and foreign officials familiar with the arrangement"; "current and former intelligence officials and diplomats from three continents"; "officials familiar with the program"; "current and former and U.S. and foreign government and intelligence officials"; "four current and former officials"; and, more specifically, in some instances to "a former senior intelligence officer who worked in the CIA's Counterterrorist Center"; "another former senior CIA official"; and "a senior CIA officer." If we were dealing with Judith Miller rather than Dana Priest, I might be less credulous, but I'd say it is very safe to say that Priest has at least four sources, probably more -- at a minimum, two distinct former CIA officials (part of the Goss purge, no doubt), one current CIA official (that's one brave hombre), one or more current or former State officials. I would like to think that there's somebody at Justice with a conscience and a set of cojones as well.

I listened to Dana Priest's interview on the Diane Rehm show last week, and in it Priest convincingly and credibly painted a picture of a story that has been long in the making and that is based on disclsoures from a variety of long-cultivated sources. She was rather cagey when asked why those sources suddenly decided to talk about the black sites; her response was that it was due to the dogged pursuit of the information (or words to that effect), which is certainly tantalizing. But I was convinced -- especially having read the article -- of her veracity on the matter of the article's development.

None of this, of course, excludes the possibility that one of Priest's sources was a GOP Senator or Hill staffer. Indeed, some of the information reported smells like it might have come from the Hill (e.g., "[t]he CIA and the White House . . . have dissuaded Congress from demanding that the agency answer questions [about the treatment of CIA-held prisoners] in open testimony" or "[m]ost of the facilities were built and are maintained with congressionally appropriated funds, but the White House has refused to allow the CIA to brief anyone except the House and Senate intelligence committees' chairmen and vice chairmen on the program's generalities"). But what I have briefly cataloged above certainly leads me to doubt that a Hill souce -- if one does exist -- was anything like the prime source for the piece.

It also is possible that Lott knows more than he is letting on and that he actually does have some inside info on a GOP leak. But color me very, very suspicious. Let's hope Lott's not handing the Democrats a boomerang.
Posted by Ginger Man at 4:13 PM 1 comment: